Twas the night before Christmas...🎄

Twas the night before Christmas, in the sleeping cats house,Not a feline was stirring - not even a mouse.


Cat stockings were hung by the chimney with care,In hope that Santa Paws soon would be there.

The kittens were snuggled in mama cat's bed,
With brothers & sisters curled head-to-head.And mama cat on her quilt, and I on my mat,Had just settled into a delicious cat nap.

When out of the yard there arose such a clatter,I sprang from my mat to see what was the matter.


Away to the window, I flew like a flash,Climbed up the curtains, and pressed my nose to the glass.

And what in the world did my feline eyes see,But a small golden chariot, pulled by cats just like me!With a fluffy old driver, so white and so furry,I knew in a moment it must be Saint Purry.


More rapid than rabbits his kitties they came,And he yowled and meowed, calling each cat by name."On Slippers, On Sneakers, On Bigfoot, On Spats!Christmas is coming, lets go gentle cats!"


Now, White Sox, Now, Bootsie, Let's go Gloves & Mittens!To the back porch we do fly! Let's go cats and kittens!So down to the cat door, his kittens they flew,With a catnip filled chariot - & Santa Paws too.

And then, in a twinkling, I heard on the latch,The paws & clawing of Santa Paws scratch.As I sniffed around for his scent and looked all around,Through the cat door Santa Paws came with a bound! 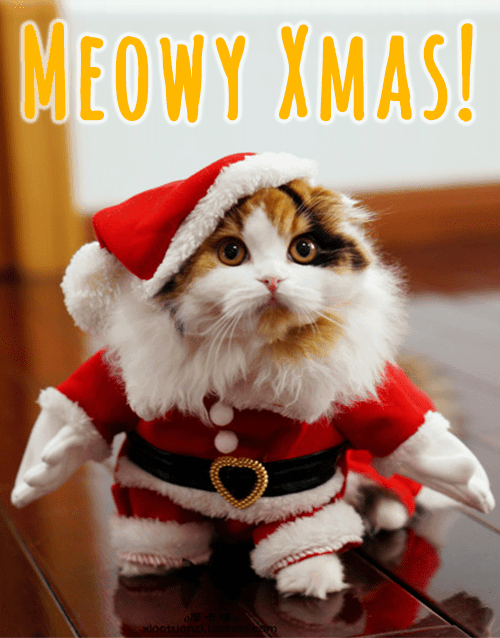 His eyes how they sparkled, his whiskers, how merry!His cheeks were like marshmallows, his pink nose like a cherry!His little cat mouth was drawn up like a bow,And the fur on his paws was as white as the snow.

He meowed not a word, but went straight to his work,And filled all the stockings, and turned with a jerk.Then washing his whiskers, his ears, coat & tail,After having a snack, out the cat door he sailed.

He jumped in his chariot, to his team gave a yowl,And away they all flew, like nine cats on the prowl.But I heard him meow, as he drove out of sight,"Meowy Christmas to all, & to all a good night!" 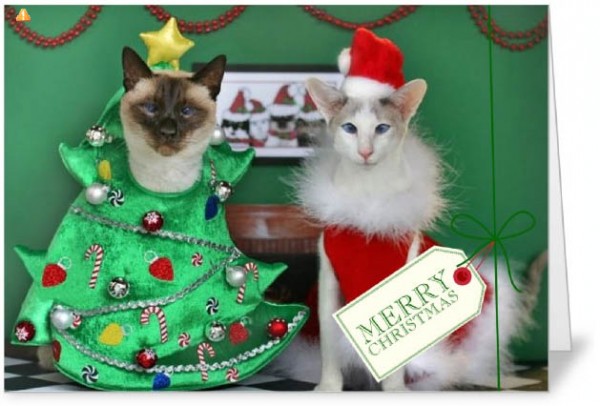 Your Blog Host
Raven
Posted by Marie at 4:29 PM